In 1971, Godfrey Newbold Hounsfield built the first CT (computerised tomography) scanner which he designed to take pictures of the brain, he used it to reveal a brain tumour in a 41-year-old female patient. Hounsfield was the first person to combine an X‑ray machine and a computer, despite tomographic techniques being used since the 1930's.

Amazingly, CT scanning owes a lot to the Beatles! During the 1960's Hounsfield worked for EMI, the music corporation that owned The Beatles’ music. EMI then invested the profits made from Beatles records into Hounsfield’s scanning technology. Hounsfield was awarded a Nobel Prize for his work in 1979.

The first whole-body CT scanner was built in 1975. CT scanners are now used to take pictures of almost any part of the body, as unlike traditional X-ray machines, it sends multiple X-ray beams through the body at different angles. Detectors inside the machine then record how these beams pass through sections of the body. A computer processes these measurements and builds an internal image of the body using complex mathematics and displays this on a monitor. CT scans are also known as CAT (computer-assisted tomography) scanners.

At the beginning of the 19th century, chemists managed to isolate pure morphine from opium, giving doctors an even more powerful painkiller. Researchers theorised that morphine resembled some sort of molecule that the body itself produced to deal with pain.

In 1975, at the University of Aberdeen, Dr. Hans Kosterlitz and colleague John Hughes found two closely related molecules extracted from pigs brains. They called them “enkephalins”, meaning in Greek “in the brain.” The enkephalins turned out to be 'pentapeptides', molecules composed of five amino acids linked together. Later, longer chains of amino acids, all incorporating the enkephalin structure, were found to stimulate opiate receptors and were termed 'endorphins'. They resemble opiates in their ability to relieve pain and give a sense of well-being. In other words, they work as natural painkillers.

The first IVF pregnancy was during 1973 in Melbourne, Australia but unfortunately ended with an early miscarriage.

The world's first test-tube baby, Louise Brown is born on July 25 1978. Dr Patrick Steptoe, a gynaecologist at Oldham General Hospital, and Dr Robert Edwards, a physiologist at the University of Cambridge, develop a new technique to fertilise an egg outside a woman's body before replacing it in the womb. Louise's sister Natalie was the 20th baby born in the UK through IVF. 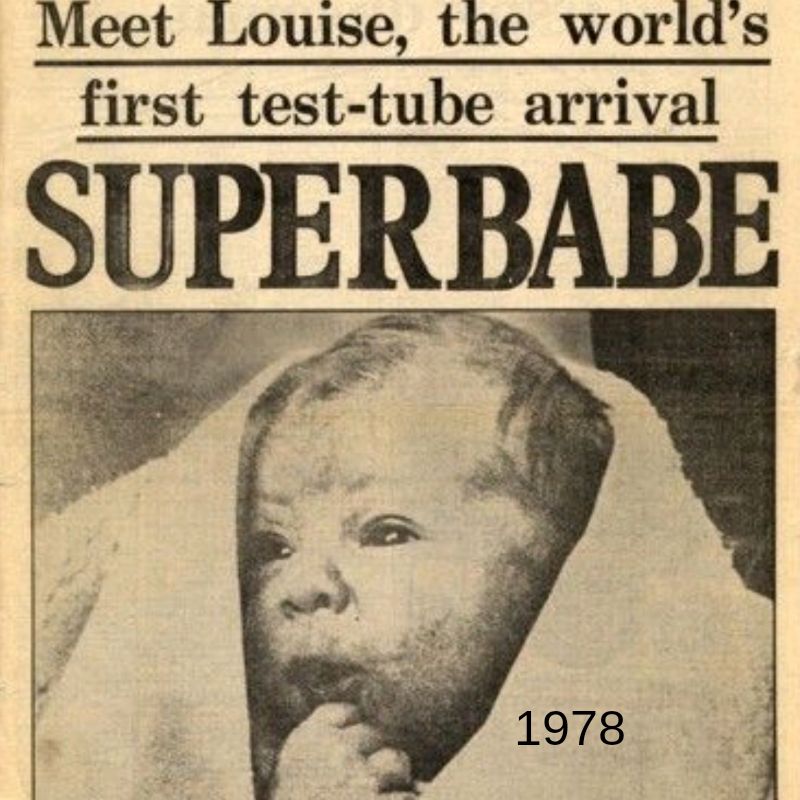 Louise will be turning 40 this year and now has two sons of her own who were both conceived naturally.

Join us again tomorrow as we leave the Seventies behind and move into the Eighties.