We continue our look back at the amazing developments in the NHS during the week of its 70th Birthday. Today we explore 1989 - 1998...

The NHS and Community Care Act 1990 was the first major reform of the NHS since it's birth in 1948.

This was the first legislation to try to bridge the gap between health boards and local council social services based on the 2 white papers 'Working for Patients' (1989) and 'Caring for People' (1991),

Social Care departments were given the responsibility for community care for older people. These services would be geared to what the older person needed rather than what was actually available. These needs were learnt following a community care assessment. Home care, day care and respite care were to be developed to help people live in their own homes wherever possible. This legislation was the first time that the needs of carers were taken into account.

From this time health authorities will manage their own budgets and buy healthcare from hospitals and other health organisations. In order to be deemed a "provider" of such health care, organisations will become NHS trusts – independent organisations with their own management. In 1991, the first 57 NHS trusts were established to encourage creativity and innovation and challenge the domination of the hospitals within a health service increasingly focused on services in the community. 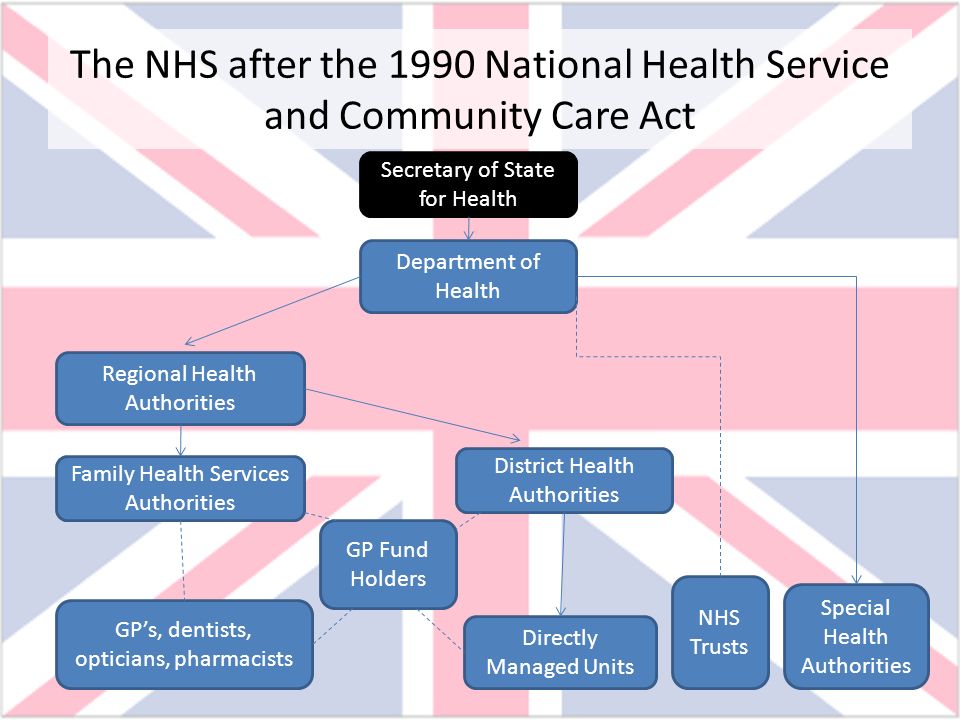 The NHS Organ Donor Register is launched in October 1994, following a 5-year campaign by John and Rosemary Cox and their daughter, Christine from the West Midlands. In 1989, their 24-year-old son Peter died after a nine month illness due to an astrocytoma. He had told his family that he wanted his organs to be used to help others after his death. The Coxes said there should be a register for people who wish to donate their organs.

Following Peter’s death, the family wrote to Virginia Bottomley, the Secretary of State for Health with their idea for a UK-wide database of people willing to donate their organs. Since 1971 kidney donor cards had been used and these were replaced by donor cards for most organs in 1981. However, donor cards could be lost, or simply not found by busy medical and emergency services staff. The wishes of some people who wanted to donate went unknown.

The family wrote hundreds of letters and give interviews to national newspapers and broadcasters. They worked with MP's and Peter's story was discussed in parliament. In 1993, Christine spoke at the Conservative Party Conference in Blackpool and following meetings with Minister Tom Sackville (Under-Secretary of State - 1992 and 1997) Tom announced the formation of the NHS Organ Donor Register in October 1994. The family worked on the national publicity campaign that followed and the register has become an integral part of the work of NHS Blood and Transplant.

New figures checked for the NHS70 celebrations show that 6,600 people who were on the register have now become donors after their deaths since it was launched in 1994, leading to 18,000 life saving and life improving transplants.

Are you registered? You can visit https://www.organdonation.nhs.uk//register-to-donate/register-your-details/

NHS Direct was a nurse-led health advice and information service which was established in March 1998. It  provided a national number for residents and visitors in England to call for healthcare advice, 24 hours a day, every day of the year. It also provided a web based symptom checkers on the NHS Direct website and via mobile apps.

Service users were asked to answer questions about their symptoms. Common problems were often given simple self care advice. More complex problems were assessed by a nurse and could then be given treatment advice or referred on to another service within the NHS.

The service goes on to become one of the largest single e-health services in the world, handling more than 500,000 calls a month. It's the start of a growing range of convenient alternatives to traditional GP services.

It was discontinued on 31 March 2014 and replaced by NHS 111 which is a free number to call and directs you to the right local service, first time.